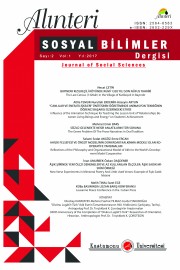 Summary/Abstract: Minstreal literature is our cultural heritage which has a long history of carrying the understanding of arts by the Turks from the culture of Central Asia to the present day. Minstreal literature also includes in its structure the influences of many elements to this day. Socio-political, economic and many other factors, particularly in making a homeland in different geographies throughout the centuries, have been influential on minstreal literature. This effect has sometimes manifested itself in the literature in a positive and sometimes in a negative manner. In this study, new verse experiments and less used verses were examined in the context of Âşık Sadık Miskinî. At present certain minstreal poets are seen that bring forth poems with new verses to these poems. Âşık Sadık Miskinî can be considered as among these exceptional poets. While performing his art in the context of minstreal poetry, society has always recognizes it with its differences. He created all his works with syllabic verse, produced new verse poems and included less-used patterns in his new poems. By creating poems from new verses, Sadık Miskinî wanted to show both the richness of syllabic verse as well as his mastery in minstreal art. In this study, new verses and less used patterns were separated from among the compiled works of Âşık Sadık Miskinî. After this separation process, poems composed in new verse were provided with examples, and a study undertaken with the thought that it would contribute to minstreal poetry.