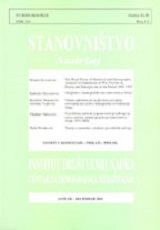 Summary/Abstract: In this paper the author has a critical standpoint toward the most known theories on joint family communities. The works of the up-to-now called Yugoslav authors were put in the foreground. The works of foreign authors were placed after. They were classified by a general criterion, by how the authors saw the origins of this form of family. The comprehension of the basic characteristics depends, as a rule, on that, as well as the elements structure, changing processes, adjustment to new conditions and extinction of the joint family community.The first part of this article is devoted to theories about family communities as an institution of the Slavs. In this way its origin is connected with elements of a certain ethnic community. The range and consequences of such beliefs are suggested.The second part is reserved to explaining the family community as an institution which appeared in feudalism. It is a consequence of the tax system role. With its termination, the communities fell apart. This kind of social development determination and this type of family is proven to be ahistorical. It is predominantly stressed that the authors neglected that feudalism was a class society and overemphasized the force factor significance.The third part deals with theories which believe joint-family communities as an institution which arose in the transition from tribal to class society. These researchers stress that it is a general, historically determined conditioned form, which originated before class society and terminated with its development. Elements of its structure are especially important, as well as methods of its transformation in new conditions and termination processes. The essence of this belief is the following: a joint-family is a general historical form of family organization which arose in the transition from tribal to class society. The most important characteristics are: 1) blood relationship among men members; 2) common property; 3) undeveloped division of labor, and plain peoples work is the most important for its survival; 4) democratic control; and 5) it is not just mere gathering of simple families; it is based on kinship, origin and precedes monogrammed families.