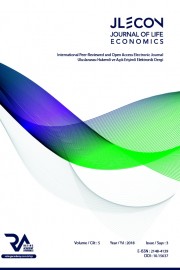 Summary/Abstract: The subject and purpose of this article is to investigate the problem of privatization of Türk Telekom (TT) and its results in a dialectical way. Privatization, the instrument of economic globalization, is an effective vehicle of post-capitalist order. Turkey adopted the liberal capitalism with the January 24, 1980 Stability Program and took the decisions of privatization and deregulation. TT's privatization process is a piece of these decisions. This privatization was not economic but ideological, because TT was one of the most profitable institutions in Turkey. With the privatization of the TT, the neoliberal wheel has turned that the IMF and the comprador bourgeois wanted, but the class struggle against the working class has deepened. Targets of TT privatization were cheap and widespread service, integration with foreign capital, competition and efficiency, but the targets of high employment and good wages were neglected. As a result of the privatization of the TT, regulators have been introduced against the private monopoly danger instead of the state monopoly, and thus the bureaucracy has declined further. Private TT has produced various geoeconomic and political economy consequences in terms of Turkey and the region. These results are strong, weak, opportunistic and dangerous. So, a SWOT analysis was done here.