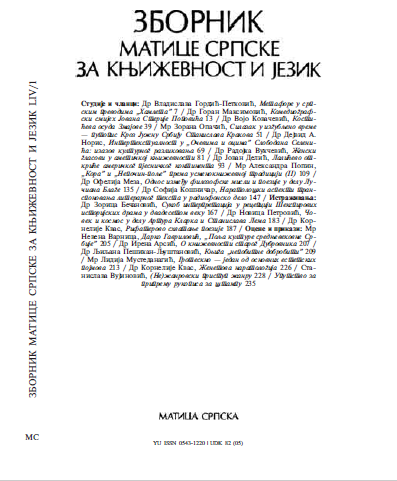 Summary/Abstract: With a comparative technique, from the positions of the constitutive and modal study of an esthetic topic, the paper analyzes both a literary artistic work and its radio-phonic correlate by the observation of the crucial narratological categories, with the aim to view and determine the correlations, forms and degrees of interdependence of the invariable and variable parameters of the transposition at the general level. The corpus for the analysis included all radio performances of the novels and short stories of Ivo Andric, Miroslav Krleža and Milos Crnjanski in the Serbo-Croatian language which were broadcasted for the first time in the period after World War II, till 1985, on the waves of The Belgrade Radio, The Novi Sad Radio, The Sarajevo Radio and The Zagreb Radio. The results of the research confirm the assumption that the transposition of a work of art as an esthetic sign into another medium cannot be done “without the residue”, that is it cannot be broadcasted as an identical (“cloned”) structure, but it can be realized as fully compatible with the initial source as its ideological-esthetical correlate — so these two do not function as completely independent artefacts. Realization of the discourse material in the radio performance develops through a highly complicated acoustic language of the radio medium, which by its polyphonous constellation grows into a metalanguage and meta-artistic structure.