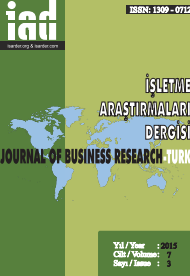 Summary/Abstract: In this study, durability of the Banking Sector against the possible risks that it could face during economic crisis has been evaluated. Banking sector has been divided into 4 main branches as Public, Local Private, Foreign and Participation Banking. Fiscal data and ratios of the year 2014 have been made use of. The analys is made up of 3 stages, biddability ratios, liquidity ratios and the changes in the foreign exchange net general position / regulatory capital ratio, have been analysed. As the basic criteria, the legal boundaries determined by the Banking Regulatory and Supervisory Agency have been taken into consideration. In the analysis, Public Banks have become the strongest banking group, while Participation Banks have been the weakest one in under the economic crisis conditions. In terms of liquidity coverage, Foreign Banks have got the best position, while Participation Banks have ranked as the weakest. In terms of Foreign Exchange Net General Position / Regulatory Capital Ratio, Foreign Banks have been the most susceptible bank to problems, while Public Banks have been the strongest banking groups with the strong capital and position.