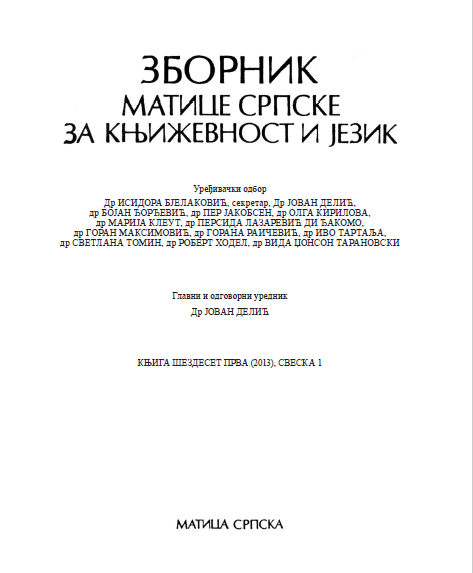 Summary/Abstract: The paper investigates explicit peotics of Rastko Petrović dedicated to the issues of modern painting, literature and, in particular, novel. Petrović’s essays are grouped around his novels. While the fine-art criticism and studies about folklore creations from the first half of the 1920s explicate poetic questions related to Burleska Gospodina Peruna Boga Groma ( Burlesque of the Lord Perun, God of Thunder), the texts about European novel from the beginning of the 1930s correlate with the poetic horizon of Dana šestog (On the Sixth Day). Among the modernist novels, Rastko’s attention was drawn precisely by the works of the encyclopedic poetics, in the first place by Joyce’s Ulysses. While in hte poetics of Ivo Andrić and Miloš Crnjanski one can talk about the meaning of human ecistence whicj is formed in the entirety of the historical and social events, Rastko Petrović both as a novelist and as an interpreter of novels was obsessed with much wider dimensions – the cosmic one, which is an area of incessant interrelation between matter and energy, and the metaphysical one, which is in the sign of immeasurable mythical and spritual forces.