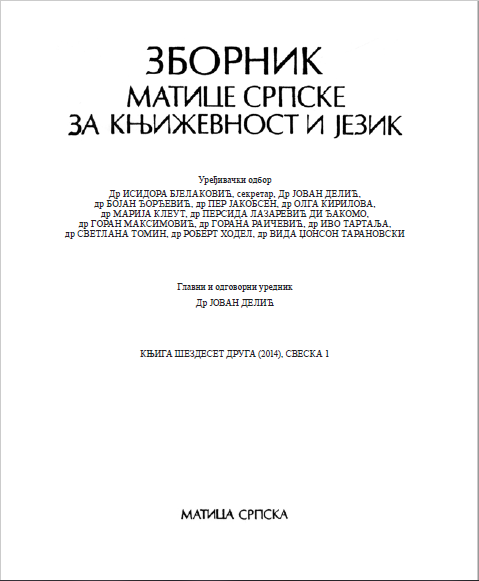 Summary/Abstract: Certainly, a myth is not a privilege of just one concrete epoch and it is not just an appearance of the archaic past. On the contrary, while the influence of the rational mind and strength of logos were growing through the history of civilization, it was harder to cope with a mysterious essence and the power of mythic narratives, its adaptability for whimsical social conditions and changes, and finally, with the more obvious and greater presence of myth in various spheres of human existence. This paper highlights the creativity of the greatest Roman playwright, Plautus (Titus Maccus Plautus, 254?-184 BC), with a reference to his only play with a mythological theme, Amphitryon. It analyzes the protagonists of the Plautus’ only tragicomedy, their roles, connections and the message. The Greek myth has found its place in French literature too. Jean Giraudoux (1882-1944) illuminates the ancient myth with a modern thinking, stimulated by the ambition to actualize and problematize the story. By that, he produces his own comedy Amphitryon 38. On the strong Plautus’ tragicomic dialogue between mortals and gods, Giraudoux adds its own poetics. He clearly draws the boundaries between the rational and the irrational in human beings. He observes human sin on a modern and metaphysical way. His Alcmena is a true embodiment of the meaning of life with all its hardships. She is an implacable and silent fighter for every human activity which is imbued with the optimistic spirit of Eros.