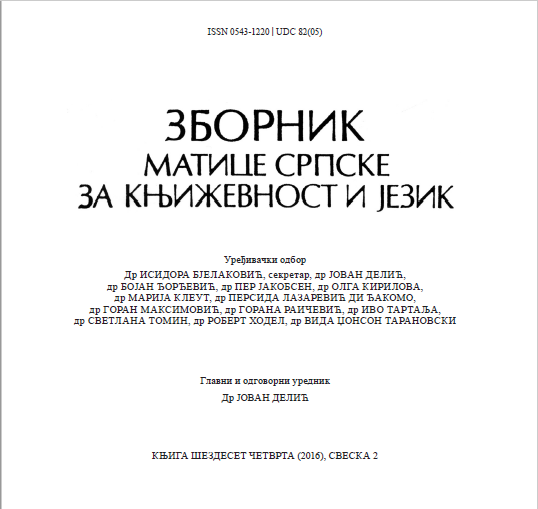 Summary/Abstract: This paper explores the prose works of Milica Jankovic, especially the novel Before happiness and the collection of stories Confessions, in order to review her place in Serbian literature before and after World War II, i.e. in the period of early and late modernism. For this purpose, the concept ofpoetic retribution was introduced to determine the manner and proportions of such a revaluation. The term was constituted due to the diplomatic practices of the new century and the old figure of retribution in rhetoric and philosophy. The prose works of Milica Jankovic can be observed through the works of Janko Veseli- novic, Laza Lazarevic and The History of new Serbian literature by Skerlic on one side and Ivo Andric, Milos Cmjanski and Dragisa Vasic on the other. Her prose works can also be seen through the works of Tolstoy, Goethe and Thomas Mann as far as it is poetically and historically justified in literature. Thus, it offers a new, but balanced historical and literary form of the prose works of Milica Jankovic, which take into account the discussion of the ideology of the formation of the canon and criticism of the canon.