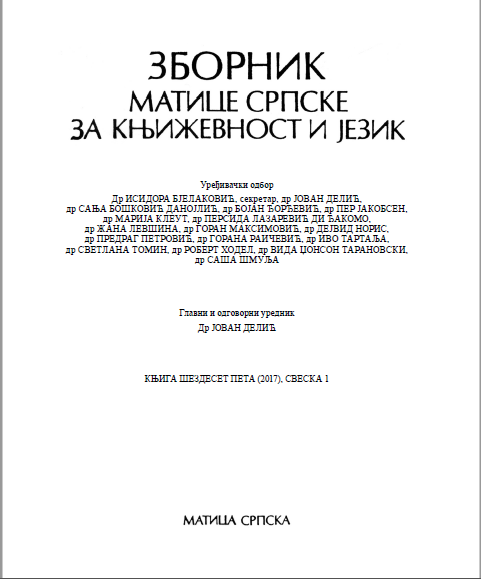 Summary/Abstract: The paper deals with the apsect of Matoš’s oeuvre that had been neglected in the Serbian and Croatian literary criticism respectively, which is his Rightist ideological discourse in the light of his relation to Serbs (Serbian culture). As for the former literary criticism, on those rare occasions his name was mentioned, it was done in a euphemistic manner (concerning his negative attitude towards Serbs and Serbian culture), whereas the latter offered few critically elaborated justifications of this problematic segment of Matoš’s oeuvre. Even today, on the 100th anniversary of his death, an opportunity was missed to topicalize these important issues and analyze what it was exactly where this problematic stance of the most pronounced follower of Ante Starčević’s ideas in the then Croatian literature found its expression. Namely, in the case of drastically negative observations made on the Serbian culture, which Matoš was deeply familiar with, even submerged into. The research comprises whole of Matoš’s oeuvre, and it becomes evident that his ideological discourse turns radical in the interaction with the Serbian culture, especially in the cases featuring background of critical discussion, politicizing, problematizing or stereotypization of relations between cultures, in the first case Serbian and Croatian ones. The paper confirms that there is a pronounced negative attitude towards Serbs and Serbian culture in Matoš’s works, where this discourse is founded upon nationalism, ethnocentrism, intolerance, even racialism.