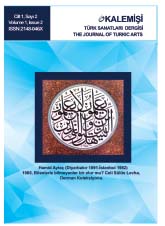 Summary/Abstract: Physical and spiritual examples of traditional Turkish culture such as; patchwork, rug patterns, ragtag, handwriting and calligarphy arts influence on contemporary Turkish plastic arts cannot be denied. The new formations which were inspired by national traditions in contemporary Turkish painting have been spread since 1940s but in 1950s as a strong fact it began to use local values and this thought became more important. In this formations, the artists such as Bedri Rahmi Eyüpoğlu, Adnan Turani, Erol Akyavaş, Abidin Elderoğlu, Ergin İnan, Rauf Tuncer, Şems-i Arel, Süleyman Saim Tekcan, Ramazan Bayrakoğlu, Hüsamettin Koçan etc. gave works which were trending to contemporary. The artists showed formation structure of traditional Turkish Handcraft Arts which were the source of their works. The artists who had been keeping on to seek for National Painting were inspired from the general sources of traditional Turkish Handcraft Arts which supported originality. The examples of the paintings were minature, handwriting and calligarphy arts, carpet-rug, hand-painted, embroideries, patchwork, mark, symbol.