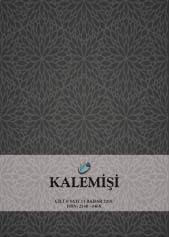 Summary/Abstract: Even though yalı (“waterfront”) mansions are an important part of Istanbul’s skyline, architecture and history, they have not been evaluated with an integrative approach yet. Research that has been conducted separately and from different angles and scopes by different disciplines is making it harder to grasp the entire picture. The initial step for eliminating this difficulty could be presenting the two main sources through which yalı mansions had been nourished and shaped. First of these sources is the Westernization process which had become a struggle between the old and new for the Ottoman Empire. It is not possible to tackle Ottoman Empire’s 18. and 19. centuries without taking into account the place and importance of the Westernization process. It could be argued that, even though they were very violent from time to time, reactions against “new” could not reach their target of “preserving the old” in this period. Similarly from yalı mansions’ perspective, it is observed that with each passing year Western-oriented architectural movements such as baroque and neoclassicism had been more visibly embraced and used. The second main source, on the other hand, is the connection formed between yalı mansions and the traditional architectural concepts. Especially during the early republican period, this connection had been studied under the topic of “Turkish House”; with an emphasis put on the desire to live as a part of nature, wood’s cultural and practical status within this context and hall-centered house layout. In this paper, aforementioned two main sources and the organic bond between them have been basically explained through a comprehensive literature survey. Purpose of this paper is to act as a starting point for gathering the pieces of knowledge regarding these two main sources which have been separately accumulated by history, architecture, urbanization and sociology disciplines to form a meaningful whole for further studies.