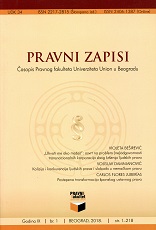 Summary/Abstract: This paper analyzes the totality of legal features of the phenomenon of vigilantism. Within the first chapter, the concept and features of this phenomenon are considered. The second chapter is dedicated to the specialized analysis of legal characteristics of vigilantism. Within the third chapter, the author shows some of the most relevant opinions regarding aforementioned topic which can be found in academic literature. The final, fourth part of this paper aims at a comprehensive analysis of the legal permissibility of vigilant actions. It was noticed that the actions of the vigilantes can take on the features of numerous criminal offences, very diverse in terms of the nature of the legally protected goods. Among other things, it was concluded that there are no legally relevant arguments for the general legalization of vigilantism, although certain circumstances in specific cases could lead to the elimination of unlawfulness, or to the exclusion or reduction of responsibility of the perpetrator-vigilant. This mainly refers to institutes of actual misconduct, necessary defense and its overstepping, as well as to other factors concerning the perpetrator-vigilant, the behavior of the victim of the vigilant action, and the characteristic of a concrete vigilant situation.