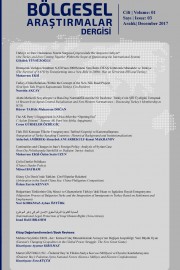 Summary/Abstract: After the entry of China into the United Nations Security Council in 1971, relations between Turkey and China officially began. The 2000s was the period of recovery and restructuring for Turkey-China relations. With the One Belt One Road Project announced by Chinese President Xi Jinping in 2013, Turkey-China relations with a history of about 45 years have entered a new turn. In this study we will evaluate the historical progress and development of relations between Turkey and China within the scope of OBOR Project.