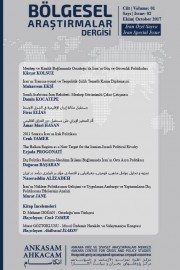 Summary/Abstract: States substantially shape their geopolitical positions, power, and security policies through their geopolitical positions, geopolitical imagery, geopolitical codes and the rhetoric and build their national identities and foreign policies on the basis of their geographical locations. Strategic depth and hinterlands motivate states to become revisionist or compel them to become a status quo player. From the perspective of Iran, Shi’a Islam is the basic reference of geopolitical codes and the factor which forces Iran to pursue proactive policy in all geographical areas where the Shiites exist. The construction of Shia identity is the source of Iranian power and the Shi’a geopolitics is the basis of its security. The article is analyzing the concepts of power and security by examining the intensive effect of realism and constructivism in Iranian foreign policy.