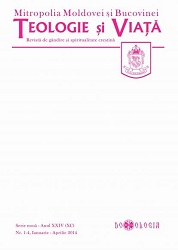 Summary/Abstract: Presented in a terse form in textbooks of Patrology or Christian literature, dictionaries, encyclopaedias, or in extensive form in monographs, studies, as well as various critical editions – the latest being drafted in 1978 by Willy Rordorf and André Tuilier –, Teachings of the Twelve Apostles or Didascalia [Didache] of the Twelve Apostles (in Greek: Διδαχή τῶν δώδεκα ἀποστόλων) is a small work, inauthentic, which early Church honored her in a special way. In this study we will refer only to the phrase μετὰ δὲ τὸ εj μπλησθῆναι οὕτως εὐχαριστήσατε contained in the tenth Book of the Didache. The expression itself, though simple at first textual analysis has born over times contradictions of character „thanksgiving”. More specifically: does the content of this expression reflects the order of agape and the Eucharist itself?