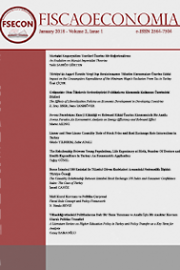 Summary/Abstract: In the historical process, the minimum wage has emerged for continuation of people’s lives, who have been earning their lives by labor work and for more humane conditions. During this process, its effects have gradually spread to all areas of the labor market and implemented as social policy tool completing the institutionalization process. The minimum wage is not only a concept bearing a social influence and a humanitarian aspect but also possessing a protective armor for the base pay workers in the market mechanism. In this respect, the minimum wage, representing an important base for determining the wages in the market, its issue of exclusion from tax is frequently discussed on the agenda for a long time. In the study, it is aimed to explain what the minimum wage is, what it means in the economic structure. In addition, it is sought to put forward what would be the impact on the consumption expenditures of the minimum wage population in the scenario of removing tax policies from minimum wage which considered a basic income in Turkey.