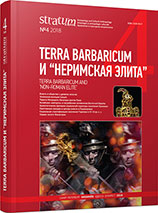 Summary/Abstract: The author publishes and analyzes objects of Chinese origin in the funerary contexts of Sarmatia and the North Pontic area in the second half of the 1st millennium BC. — first centuries AD. They are represented by mirrors, lacquered vessels and boxes, silk fabrics, weapons and costume details. The features of the chronology of objects, the dating of the complexes in which they were found, and their mapping allow us to distinguish four different chronological stages, with the distribution matrix for early objects of the 4th—2nd centuries BC and in the burials of the late Sarmatian period being similar (mainly in the Urals) and differ from similar distribution systems in the second half of the 1st century BC — first half of the 1st century AD and the second half of the 1st — first half of the 2nd century AD with the concentration of finds in the Crimea, the Don and the Volga regions. In conclusion, we consider the following possible patterns of interpretation: trade (along the Great Silk Road), migration — with the nomadic movement from east to west of Eurasia, as well as their possible spread along the chains of inter-tribal exchanges, as diplomatic gifts and military trophies. The materials at our disposal do not give a strong reason for considering them as items of trade on the land part of the Great Silk Road, and there is no reason to link the spread of Chinese items in Eastern Europe exclusively with the migration of the Alans.