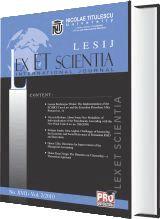 Summary/Abstract: A problem of essence of the state is the one to delimit the discretionary power, respectively the power abuse in the activity of the state’s institutions. The legal behavior of the state’s institutions consists in their right to appreciate them and the power excess generates the violation of a subjective right or of the right that is of legitimate interest to the citizen. The application and nonobservance of the principle of lawfulness in the activities of the state is a complex problem because the exercise of the state’s functions assumes the discretionary powers with which the states authorities are invested, or otherwise said the ‘right of appreciation” of the authorities regarding the moment of adopting the contents of the measures proposed. The discretionary power cannot be opposed to the principle of lawfulness, as a dimension of the state de jure. In this study we propose to analyze the concept of discretionary power, respectively the power excess, having as a guidance the legislation, jurisprudence and doctrine in the matter. At the same time we would like to identify the most important criterions that will allow the user, regardless that he is or not an administrator, a public clerk or a judge, to delimit the legal behavior of the state’s institutions from the power excess. Within this context, we appreciate that the principle of proportionality represents such a criterion. The proportionality is a legal principle of the law, but at the same time it is a principle of the constitutional law and of other law branches. It expresses clearly the idea of balance, reasonability but also of adjusting the measures ordered by the state’s authorities to the situation in fact, respectively to the purpose for which they have been conceived. In our study we choose theoretical and jurisprudence arguments according to which the principle of proportionality can procedurally be determined and used to delimit the discretionary power and power abuse.