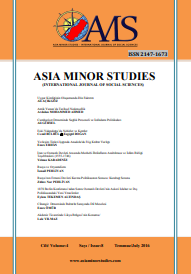 Summary/Abstract: During the Ottoman-Russian War in 1877-78 so called as 93 War because of occuring in 1293 according to the Hijri Calendar, the Ottoman Empire armies were unable to succed in the face of Russian and Romanian forces except for some of the achievements in the Caucasian front and the defense of Plevn and the war resulted in the defeat of the Ottoman Empire. At the end of the war, the Ottoman Empire signed the Treaties of San Stefano and Berlin, leading to the loss of land and prestige. To resolve the failure and shortcomings of the army in battle, training of the Ottoman Army like the European model was decided. While getting help from France on the military reforms until the War 93, henceforth Abdulhamid administration turned to Germany in this regard. The military officers were brought from Germany for the proposed reforms and the Ottoman officers was sent for training to European countries, especially to Germany, being advanced in the military context. In this regard, from the year 1880 for rehabilitation of the army, a lot of officers and technical specialists came from Germany. These are the examples: Colonel Koehler, Lieutenant-Colonel Von der Goltz. Starting from this date, the Ottoman Empire followed a close policy to Germany in terms of the foreign policy until the end of World War I. One of the most important reasons behind this was, Germany had a different policy than the other European Powers regarding the sharing policies. Undertakings required to be done to reform the Ottoman Military order also affected the foreign policy of Germany and the European Great Powers, then reforms were brought to the instrument of this policy. This study will analyze why the Ottoman Empire was close to Germany on military reforms after the war and how this situation affects the Empire’s relations with Duvel-i Muazzama.