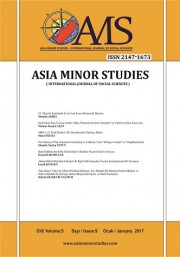 Summary/Abstract: Lebanon is the first example coming to mind once multi-ethnic and religious societies are mentioned. Throughout the ages, it has welcomed various ethnic and religious groups in the Middle East. Migration of Armenians to Lebanon was important flows changing the distribution of population deeply. This paper is about the Armenian community in Lebanon. As a non-native population of the Lebanon, Armenians were able to establish their community and to appear a distinct community. This paper consists of two sections. Firstly, the roots of the Armenian presence will be explained in the historical point of view. Secondly, it is aimed to focus on the construction process of the Armenian community. Overall, it could be argued that Lebanon for Armenians be seen as religious, cultural and political centres. Experiences of Armenians caused them to root into Lebanese society. It is not exaggerated that no other place where Armenians national life is organised so well and as efficiently as Lebanon. For this reason, Lebanon can be called as a capital of the Armenian diaspora. Lebanese Armenians have distinctive features not only in the diaspora but also in Lebanon.