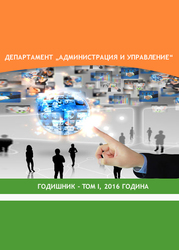 Summary/Abstract: he concept of Internet of things is increasingly discussed in recent times. The purpose of the studios is to carried out a theoretical and detailed analysis of the occurring and essence of the concept. The tasks placed according to the purpose are: tracing the development of the idea so far; analysis of the names under which the concept of entering the Republic of Bulgaria and determination of the most appropriate of them for future use; clarifying the nature of the concept and distinguishing it from other similar concepts bearing a similar meaning and name; study of practical-application significance of the concepts of realizing public and business management, as well as organizing and functioning of the public and business administration. The object of the studios is the concept of “Internet of Things”. The subject of the study is to distinguish it as a separate network and presentation of its relationship to other concepts. The main thesis, which will be presented and will attempt to protect in the studios is that the concept the "Internet of things" has its own essence and characteristics that distinguish it from other similar concepts, and therefore can be defined as an independent network different from the Internet. As a consequence of this will be offered a definition which reflects approximately precisely the essence of the concept and is suitable for use in preparing future scientific work in this area.