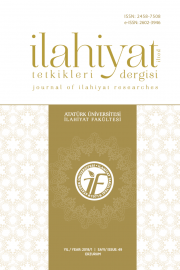 Summary/Abstract: Since the end of the 19th century, especially in Kalam, innovations in various fields of Islamic thought have been looked for. Discussions about the method and contents of the Kalam have made the necessity of this renewal of the Kalam. Some translations from Western languages and some works contain information contrary to Islam. As a result, Islam has to be re-expressed. For this purpose, it is inevitable to use a new language and method and to benefit from the possibilities of philosophy in this field. The Kalam had to rely on the new philosophy and its methods in order to be able to repel the attacks directed at the religious belief. Therefore, “New Kalam” movement was born and İzmirli İsmail Hakkı was the pioneer of this movement. In this approach, many topics such as religious-state relations, secularism, human rights, women's issues, racism, alienation, international security crisis, colonialism, hunger, belief and freedom of thought, which are all discussed in today's world, have entered into the scope of Kalam. The fact that Kalam is a science based on human interpretation proves that everyone it is open to everyone who has the quality. In this context, it is worth noting that Milaslı Ismail Hakkı, who was a medical doctor, finds this courage in himself and responds by writing a book to the questions of the Anglican Church. His work is important for showing different approaches. He has demonstrated a Koranic approach without using classical Kalam sources. The relationship between faith and religion, approach to different religions and the importance that Islam gives rise to science are the main themes of his. It is especially worthwhile of him to study the wisdom of worship, psychological and moral dimensions.