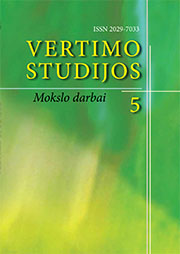 Summary/Abstract: EU texts are produced by way of multilingual negotiation in a supranational multicultural discourse community, where there is no linguistically neutral ground and where the internationalisation of concepts and ideas is a sine qua non. As a result, they are idiosyncratic texts, reflecting specific textual features. Their translation in the current 23 official EU languages is equally idiosyncratic and challenging, to say the least, especially since it is shaped under the EU’s overwhelming cultural and linguistic diversity, the constraints of its policy of multilingualism, and the subsequent policy of linguistic equality which states that all languages are equal, or ‘equally authentic’ (Wagner, Bech, Martínez 2002, 7), and that translations are not really translations but language versions. In other words, in the framework of EU translation, the terms source text (ST) and target text (TT) cease to exist, while the prima facie illusory notion of ‘equivalence’ seems to resurface—though altered in nature—and dominate the translation practice. It thus goes without saying that in the case of EU texts and their translation a tailor-made theoretical framework is required where many classic concepts of Translation Studies (TS), such as ST, TT and equivalence need to be re-evaluated and redefined, and at the same time functionalist approaches and the postmodernist concepts of intertextuality, hybridity and in-betweenness need to come to the fore. The proposed translation theory for EU texts flaunts the feature inherent in their production, it is—just like them—hybrid.