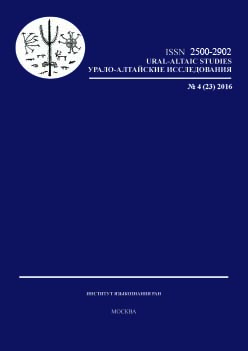 Summary/Abstract: In the article, five Kazakh written monuments of the late 19th and early 20th centuries are discussed. Some peculiarities of consonantism that appear in spelling are found out, in comparison with the modern literary Kazakh language ("bias" in favour of voiced consonants, vowel harmony violation, intra-word contractions, insertions and losses of phonemes). It is noted that the monuments at hand reflect a certain stage in the historical development of the Kazakh language, in particular, the process of the allophones’ phonematization by voicelessness / sonority. We were able to single out the main factors causing the phonetic differences between the monuments and Modern Literary Kazakh (orthoepic tendencies, impact of dialects and sub-dialects on the monuments’ language, influence of other languages (Arabic, Russian, and Turkic languages).