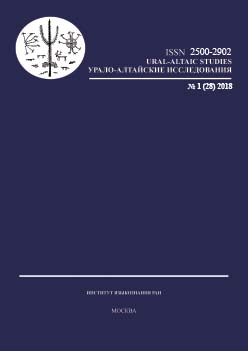 Summary/Abstract: The article deals with the problem of choice of two possible vowels in singular possessive suffixes and in the instrumental marker in Udmurt. Two hypotheses existed in scientific literature until now: one stated that choice of vowels depends on development of Udmurt words from two different classes of Proto-Finno-Ugric stems, the other supposed that it is conditioned semantically. After conducting research on an extensive textual corpus we have confirmed that both etymological and semantic relations exist, however, each of them works only in a limited number of cases. Establishing the boundaries of use of etymological and semantic factors allows determining the limits of Udmurt data relevance for the reconstruction of Proto-Finno-Ugric stem classes.