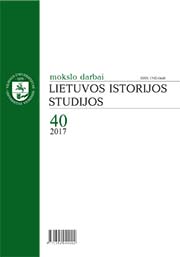 Summary/Abstract: The circumstances and conditions for either deliberate or unintentional falsifications of documents were created at the beginning of the sixteenth century with the sudden growth of the culture of literacy. Investigators of those times were faced with the task of examining said counterfeited documents. However, a part of the falsifications have not been identified since. In consequence, contemporary historians and publishers are burdened with the possibility of finding such documents. There may be an instance when a falsified document is published several times and, on the basis of that, factual errors in historiography may appear. A particular example of such falsification may be the case of the privilege of Aleksandras Jogailaitis, which was awarded to Ona Masalskienė and her three sons on March 22, 1506. After applying the diplomatic method and thorough formal analysis, it has been revealed that the quoted privilege is a falsification. This privilege does not meet the formalities of the documents issued by the Chancellery of the Grand Duchy of Lithuania in the beginning of the sixteenth century. The use of words and expressions that would otherwise be unusual for the sixteenth century, e.g., the word “love,” further confirms the fact of falsification. Additional proof of falsification is that the witnesses mentioned in the eschatocol are listed incorrectly; moreover, the used stamp is titled “sigillumque ducale.” The language in which the document was written does not convince of its originality either. There were not many documents that were issued in Latin in the beginning of the sixteenth century. In addition, it is quite complicated to find any documents that could be easily compared to the examined one. Most likely, this falsification appeared in the background of Vilnius Bishop Ignacijus Masalskis, while trying to increase income received from Druja as there was an important customs point as well as a tobacco warehouse there. However, it remains unclear why this privilege was first recorded in the books of the Supreme Tribunal and approved by the ruler only 25 years later.