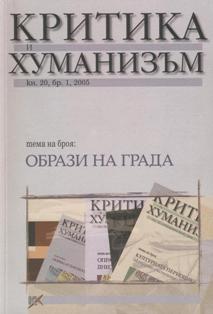 Summary/Abstract: The article is a part of an ongoing project, started in New Europe College, Bucharest, in 2005, thanks to the fellowship of the College. Modernity – represented and expressed in images from the Balkans – is a main interest in the project. The intention in this text is a close seeing / interpreting of specific works from Bulgaria and Rumania. In visual arts, in painting from the Balkans, unlike in poetry, images of the modern city, before the wars (Balkan’s and First World War) were rare. Still rarer were the images of the modern Balkan city, of Sofia or Bucharest. Although the artists had their experience, emotional and practical – they took a walk in the Prince Boris Garden in Sofia or Tceshmidjiu in Bucharest, dreamed and/ or remembered Paris and Munich. Between the real and the fictional, the material culture and the poetry, Balkan artists had difficulties in reaching the image of the modern city “of their own”. However, pieces of art which expressed modern city dispositions existed, usually marginal in regard to the criteria of artistic prestige of the time. Such works of art – representing the city people attitude to the nature, the shared experience of public spaces and interiors – are a subject of interpretation in this text. Along with them, pieces of the early art critique are discussed. Speculations on the missing “city”, the omnipresent “nature”, as well as on the relations between realism and modernity in the critical texts of that time are proposed. The discussed images of modernity on the Balkans (“modernity”, as well as “the Balkans” are thought contextually and comparatively) are marked with eclecticism and “impurity” – condition of the (visual) culture out of the History.