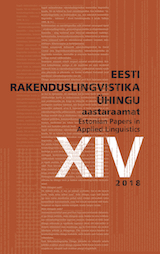 Summary/Abstract: The study is an attempt to unfold the social meaning of the phenomenon of giftedness in expanded cultural context. Construal of the concept is first studied by the frequency of collocations of the synonymous signifiers of the term of giftedness in the Estonian Reference Corpus, German Reference Corpus, and British National Corpus. After that, the construction of meaning of giftedness is qualitatively studied by interviewing children and parents (15 qualitative open and non-directive mode interviews). Critical discourse analysis (Fairclough 2001) is used to show the linguistic choices and their links to discourses through which the interviewees construe the concept of giftedness, pointing to certain social relations and meanings. Results showed that giftedness was associated with childhood, highlighting the attractiveness and distinction of the phenomenon. In different languages, giftedness is associated with relatively similar features (development attractiveness, differentiation, domain-specificity) but the perceptions are different for children and parents. For children, giftedness is multidimensional but it does not get enough attention at school, whereas for parents, it is a gift from God that needs their dedication although supported by the educational system. The positive meanings of the phenomenon are made visible by children.