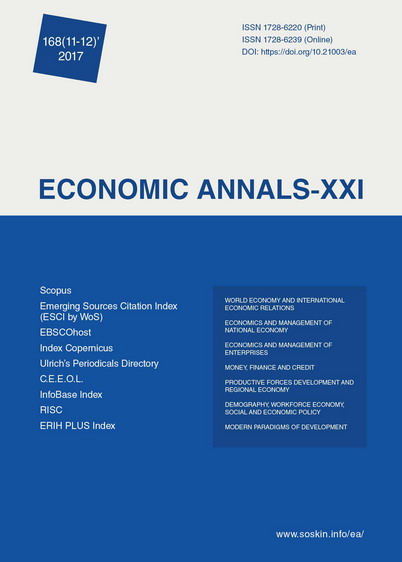 Summary/Abstract: Currently, the Intermarium project is becoming more and more relevant, given the recent geoeconomic and geopolitical processes on the Eurasian continent. This results from a number of expanding crisis processes, as well as from different understanding of the structure and development of the European Union. It is well known that the European Union is going through hard times after the UK leaving the EU, as well as in view of the growing controversies between the «North-South» and «West-East» axes. The core EU member states, including Germany and France, are shifting towards a need to review the concept of development of the European Union. In this respect, the initiative of Andrzej Duda, the President of Poland, is very timely and implies the implementation of the Intermarium project which should be developed and given concrete meaning, thus strengthening cooperation between Central and Eastern European states representing the «North-South» axis. The relevant countries are located in the area of the Baltic, Black and Adriatic Seas. Thereby, in our opinion, it is essential to extend the abovementioned project to Eastern European countries, of which Poland and Ukraine could become leaders, in order to shape the Eastern division of the project, crossing the Baltic and Black Seas and proceeding to the Caspian Sea. In our view, the Intermarium project is diverse and complex. Its basis is polysystemic, and its nature is universal. The project makes it possible to bring together researchers who have knowledge in various areas of science. Also, the spiritual and religious aspect of the project, particularly in the context of the Christian teaching, as well as its civilizational, geopolitical and geoeconomic dimensions, may become some of the important issues relating to the Intermarium project itself. The article provides an analysis of possible modalities for micro- and macrocooperation within the framework of the Intermarium project, including its two elements, which are the EU member states and selected Eastern European countries. A powerful integral unity of the two countries, which are Poland and Ukraine, could be the driving force behind the Intermarium project and its Eastern division. Thus, as it is shown in the article, the Intermarium project as a whole has a great future and can be perspective for all participating countries, including EU member states.