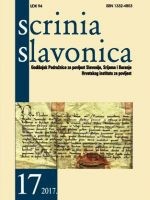 „GRANICE” SLAVONIJE U 13-14. STOLJEĆU
THE BOUNDARIES OF SLAVONIA IN THE 13TH-14TH CENTURIES - REMARKS ON THE BORDER ROLES OF THE RIVER DRAVA AND MOUNT GVOZD

Summary/Abstract: In a merely geographical sense the river Drava and Mount G(v)ozd are treated by Hungarian historiography and historical topography with ease as natural borders of medieval Slavonia. Nevertheless, in a purely political sense these two geographical phenomena provided boundaries of “Sclavonia” during the whole Middle Ages, thus the evolution of the meaning of their roles as borders, and the dimensions related to this function, require a thorough analysis of the extant written sources. In the first half of my paper I try to confute some definite misconceptions within the older and more recent historiographies realated to the reconstruction of the Drava river’s role as a political border. Based on the interpretation of papal charters from 1230 and 1232, I point out that, although in the early 1230s at the very latest, the differentiation between Hungary and Sclavonia was already unequivocally defined in a political sense, these papal charters are insufficient to give us any serious support in defining the early boundaries between Hungary and Croatia which existed a few centuries before that point. The second half of the paper deals with the reconstructional problems of the exact location of the “mount Gozd” (this problem is mostly neglected in Hungarian historiography in general). Based on the analysis of the border mountain’s sporadic mentions in charters and narrative sources, I emphasize the importance of geographical perspectives of our available sources (Croatian and Hungarian/Slavonian, respectively), and I suggest to bring some definite institutional/legal facts into consideration at the same time.