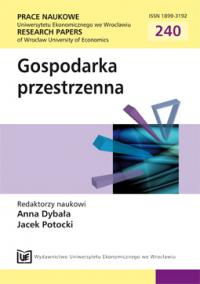 Summary/Abstract: Nowadays a more and more important role in local development is played by immaterial factors. Among them, human capital is particularly important . It consists of human being's knowledge, skills, experience and vital forces. In times of Knowledge Economy, it becomes the principal developmental catalyst on a macro scale, but it also affects regional development. The paper presents the results of investigations on measurement of human capital of local government authorities in Świętokrzyskie voivodeship and its relation to the level of communal development. All communes in Świętokrzyskie voivodeship were included in the study, except Kielce, which is a city with a county status, in 2006-2008. A source of empirical data was information obtained from the Regional Audit Chamber in Kielce and interviews with management personnel of communes (borouh leaders, mayors).