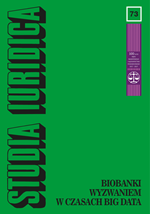 Summary/Abstract: Any information relating to an identified or identifiable natural person is consideredpersonal data, and as such, is protected by data protection laws. There are, however, a fewspecific categories of personal data related to the intimate sphere of life, the processing ofwhich is, in principle, prohibited, unless one of several exceptions occurs.Although, early data protection regulations distinguished the state of health asspecific category of data, genetic data were not treated as such. Therefore, in the lightof Convention 108 (adopted in 1981) and Directive 1995/46, genetic data were treatedas “ordinary” personal data. The Polish Data Protection Act from 1997 went further than the Directive 95/46 and listed “genetic code” among specific categories of data.However, the term “genetic code” was not defined in the Act and in practice causeda lot interpretation problems. The General Data Protection Regulation, adopted in 2016and replacing national laws, including Polish data Protection Act, enumerates geneticdata among specific categories of data. In the light of the GDPR “genetic data” meanspersonal data relating to the inherited or acquired genetic characteristics of a naturalperson which give unique information about the physiology or the health of that naturalperson and which result, in particular, from an analysis of a biological sample from thenatural person in question.