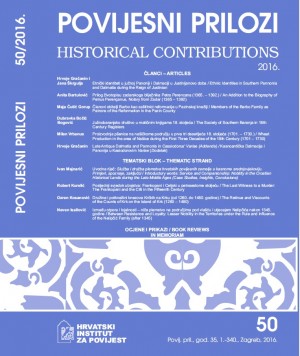 Summary/Abstract: The author analyzes text of Statutes of Vlachs published for frontiersmen/Grenzers of Varaždin Generalate in in the 1732 in latin and kajkavian variant of Croatian language and compares this document with the older one, the Vlach Statutes / Statuta Valachorum from 1630. year. The aim of this new document was to redefined obligations and rights of frontiersmen in Varaždin Generalate after a long period of social and religious disturbances during first three decades of 18. century. Author points out that the appearance of this document must be considered in context of military reforms in Varaždin Generalate made by Count Caspar Ferdinand von Cordua. He reorganized military structure of Generalate establishing new military units, but reducing the pay of frontiersmen and raising of pay for officers was not acceptable for frontiersmen. Styrian estates although opposed his reforms warning Vienna court that financing of Varasdin Generalate under this circumstances was useless and that well established and equipped frontiersmen army cam also represent potential threat for Monarchy. As for a new Vlach Statutes, they like the old Statuta form 17th century had not consider religious and ecclesiastical issues, but restricted frontiersmens right of free disposition of posessions and forbade buying out military service. Most important change was nomination of military judges (auditors) in seat of every of four captaincies, which have accomplished the duties of previouse supreme judge and eight assessors. Auditors solved different complaints of frontiersmen, including those against military captains (vojvode), and vojvode have got the possibility of making final decisions in quarrels which can be solved without official judicial procedure. Although Vienna Court supported Cordua’s plans and promulgated them in 1733 they have been accepted only partialy, but reforms caused disturbancies and resistence of frontiersmen and new Statuta for frontiersmen of Varasdin Generalate were not officialy proclaimed because authorities wanted to keep peace in Military Frontier.