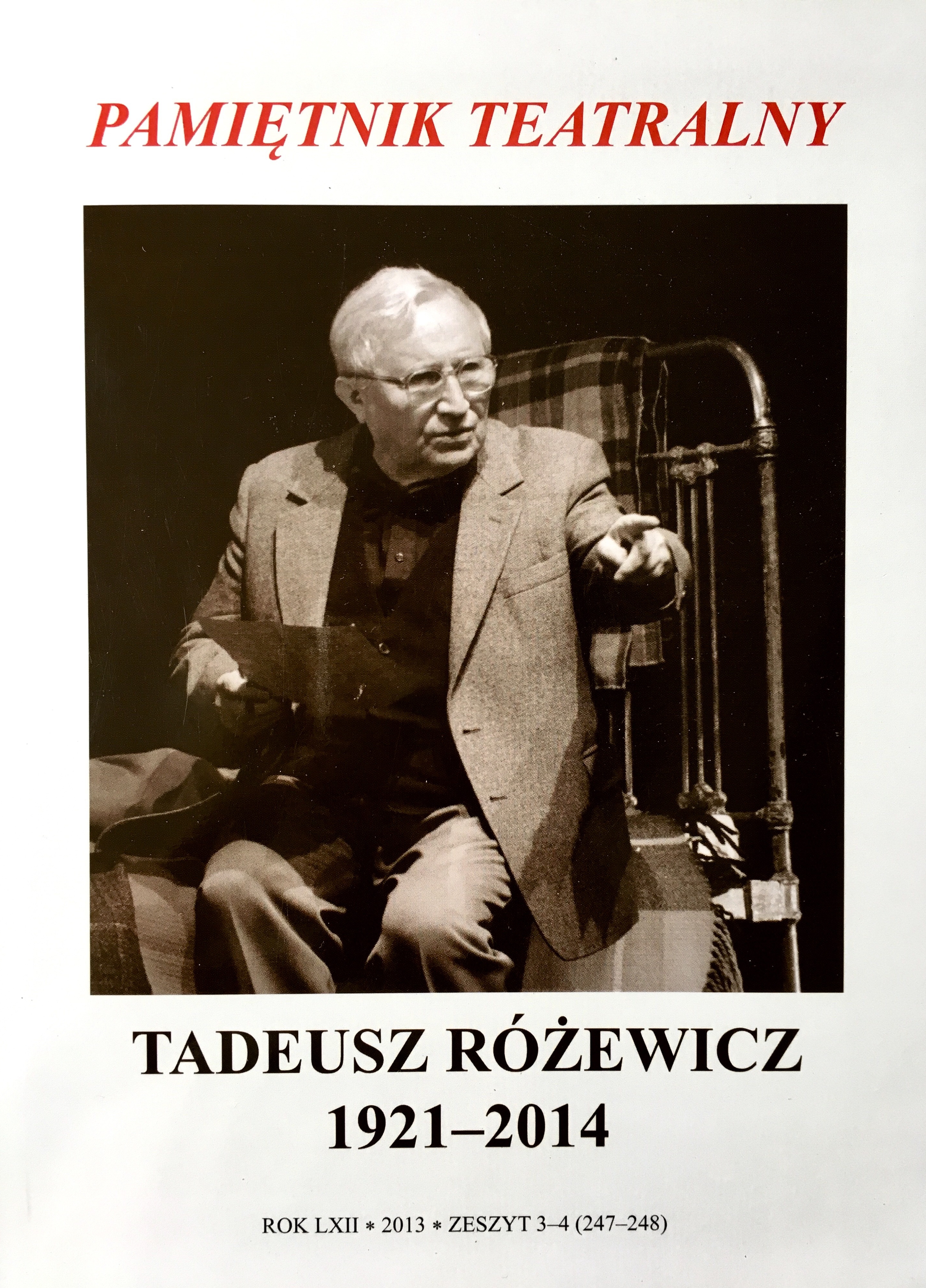 Summary/Abstract: The text brings an attempt to grasp a basic set of conditions determining the dramatic work by Tadeusz Różewicz, the greatest Polish playwright of the second half of the 20th century. I set aside postmodernism as being insignificant as far as Różewicz’s plays and the proposed interpretation are concerned; I also leave off the viewpoint of avant-gardes because Różewicz has never been anavant-garde poet, even though it is obvious that avant-gardes are partly responsible for the condition of contemporary art. There are three basic contexts that I bring up in my reading: the first is the act of overcoming and discarding the traditional metaphysics of substantive being, concurrent with the emergence of new metaphysics of existence which has made it possible to grasp the hitherto overlooked truth of ordinary being and to ask about its sense; secondly, there is the situation of an author and his or her work after the end of the arts and letters when the old frameworks of poetry and theatre are in ruins; and thirdly, there is the total deficit of meaning, aggravated additionally by the totalitarian regime. In his search for the meaning of life – a meaning of small proportions, ordinary and absolutely conditional – Różewicz must concentrate on an individual being that exists in this regime, with the influence it exerts on how the meaning is sensed, whether it is lacking or misapprehended. He does so using forms that are for various reasons crippled, negated, or amalgamated, because the only forms that he has at his disposal are burdened with tradition and he tries to scrape off their veneer. He does not care about their canonicity and aesthetic categories, but it is obvious that for Różewicz the question about the meaning of life includes the question about the sense of creating. Faced with the ruin of meanings and values, he has found his chance to restore meaning by turning to the human body, to what has been inscribed in it by both nature and culture, which is to say that it is a turn towards both physiology and writing. Generally speaking, Różewicz’s (not only dramatic) work is the furthest reaching consequence of the process overriding various traditions in life and art and the process of looking for substitutes for the things that have been lost beyond saving.

Decani Oratio Decani Oratio 2005 Po śladach After the Traces 2014 Performer (nie do końca) stwarza teatr The performer (not really) creates theatre 2015 Z rodziną komedii do „rodzinnej Europy” With a Family of Comedies Towards “the Familial Europe” 2015 „Takie samo miejsce” dla „orłów i komarów Parnasu”, czyli jaki dramat (i jaki teatr dla tego dramatu) zaprojektowali nasi oświeceni “The Same Place” for “Eagles and Mosquitos of the Parnassus,” or What Drama (and What Theatre for That Drama) Our Enlighteners Envisioned 2017
2023 © CEEOL. ALL Rights Reserved. Privacy Policy | Terms & Conditions of use
ICB - InterConsult Bulgaria core ver.2.0.1219