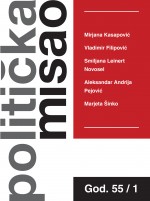 Summary/Abstract: This article analyses the revisionist currents in Croatian contemporary historiography – and implicitly also in politics – which in its focus has interpretation of the Independent State of Croatia (NDH, 1941-1945). Three main elements of the revisionist narative are: a) NDH was just a normal state concerned with rebellion in its own territory, rather than the state which used state terror to exterminate religious and ethnic communities marked as its “natural and organic enemies”. In other words, it only applied limited and legitimate instruments to protect itself from its political opponents. b) There were no massive crimes, and especially no genocide, neither against the Serbs, nor Jewish or Roma population. On the contrary, the main victims in 1941-1945 had been Croats, and thus the crimes of NDH should be de-Serbianized and de-Jewisized. c) Jasenovac was only a labour camp and prison, not a concentration death camp. The NDH used it for gathering and arresting its political opponents in order to prevent them from pursuing their destructive actions against the state. The real death camp in Jasenovac was formed only in 1945 by post- NDH communist authorities. By deconstructing what they call the “Jasenovac myth”, the revisionists are in fact trying to deconstruct “the myth of genocide by NDH”, and thus to rehabilitate the NDH either completely or partially.