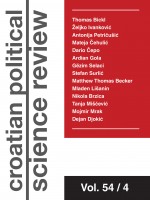 Summary/Abstract: Building on the post-secularist theory, this paper argues for a need to rethink secularism in the case of contemporary Kosovo in a context of ‘return of religion’. Political secularism as an inevitable fact and political norm, in the sense of ‘structural differentiation’ of the religious institution from other institutions, could be upheld in Kosovo. However, social secularism concerning values, practices, social habits and everyday life, or public sphere in short, poses a problem in a global post-secular context from which Kosovo is not isolated. Moreover, rather than a principle of state’s equidistance from the different worldviews competing in the public space, secularism in Kosovo is used as an identity tool or an instrument of identity politics aiming at distancing its society from religion as a way to affirm its ‘western orientation’ and secular tradition. This rigid stance is particularly directed at Islam and Islamic practices.