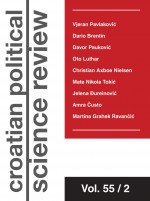 Summary/Abstract: This article examines politics of memory on the Second World War and its aftermath in contemporary Serbia, focusing on the people executed or sentenced after the war and their framing. Discussing the dominant narratives and institutional and legal frameworks of official memory politics, the first part of the paper is concerned with the dynamics between different mnemonic agents, including non-state actors. Namely, commemorations and memorials dedicated to victims of communism come from below, from the groups considering the state efforts in this sphere insufficient. They are, however, supported by some political actors, the church, and Karađorđević family. Finally, the paper looks at the perception of Bleiburg commemorations in media and political discourses in Serbia, placing it in the context of relations between the two countries concerning the memory of the war and its aftermath. As opposed to very similar tendencies in Croatia and Serbia, the political actors are concerned with their own victims respectively, framing them as the victims of communism. At the same time, the commemorations and rehabilitations happening in the other country are never acknowledged but condemned.