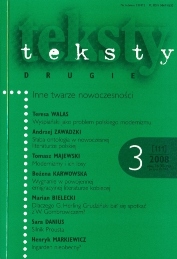 Summary/Abstract: The author considers the tradition of nihilism, in its Nietzschean and Heideggerian version, to be of use in interpretation of a number of important phenomena of 20th-century arts and literature. He advocates a thesis that weak ontology, in a variety of versions, has not only been emphatically expressed in modern arts and literature but in fact, has formed their ontological and aesthetic foundations. Mr. Zawadzki focuses on how the various practices, discourses and areas of human expression have attempted at naming the phenomenon which he himself perceives not only in terms of an academic issue but as a keen experience of our time.