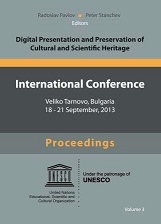 Summary/Abstract: The report presents the film 10th century. The South of the Royal Palace in Great Preslav. It consists of two parts – 10th century. The Royal Palace in Great Prelsav. The Square with the Pinnacle and The Ruler’s Lodgings. 3D and virtual reconstructions of an architectural ensemble – part of the Preslav Royal Court unearthed during archaeological researches are used in the film. 3D documentaries have already gained popularity around the world and are well received by both scholars and the public at large. One of the distinguished tourist destinations in Bulgaria is Great Preslav – capital of the mediaeval Bulgarian state and a significant cultural center of the European Southeast in 9th–10th centuries, too. The first part of the film is created with the financial support of America for Bulgaria Foundation and the second – with the funding of Bulgarian National Science Fund at the Ministry of Education, Youth and Science. A team of almost 20 members worked on the film, including computer specialists, professional actors, and translators in the four main European languages – English, German, French and Russian, Trima Sound Recording Studio. In the first part of the 3D film are shown a segment of the Royal Palace, the square with the water pinnacle and the adjacent buildings – an important structural element of the town-planning of the Preslav Court center in the 10th century. In the second part the accent is the southern part of the Royal Palace in Great Preslav, where the personal residence of the Preslav ruler’s dynasty is situated. The work on the virtual reconstruction was done by Virtual Archaeology club at the Mathematical School, Shumen. Due to the efforts of its members it is now clear how the square in front of the southern gate looked like.