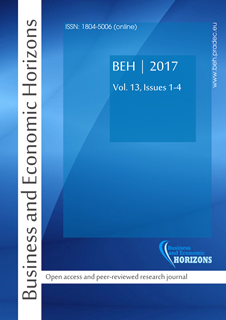 Summary/Abstract: Fiscal and monetary policy are characterized by mutual interdependence. In particular, the levels of budget deficit and public debt affect interest rates and prices. Hence, fiscal policy status affect the conduct and targets of monetary policy, and can undermine its effectiveness in curbing inflation. This paper utilizes a Structural Vector Auto-regression (SVAR) approach to investigate the impact of fiscal shocks on monetary policy and overall price level in Egypt. This is particularly relevant for the Egyptian economy since it currently witnesses unprecedented inflation rates and high levels of public debt as well. Hence, it is crucial to understand how the high levels of public debt affect prices, interest rates and other variables. Empirical model results found evidence supporting the application of fiscal theory of prices in Egypt. The main findings of this work is that inflation in Egypt is primarily a fiscal phenomenon, rather than a monetary one, as the impulse response functions have shown that a positive shock to fiscal deficit leads to a significant increase in consumer price index. Although the Central bank reacts to high prices by increasing the discount rate, the effect of this instrument on the price level is not significant, given the high level of budget deficit and public debt. Furthermore, variance decomposition showed that budget deficit proceeds the discount rate in explaining changes in prices, implying that monetary policy alone has limited effectiveness in targeting inflation.