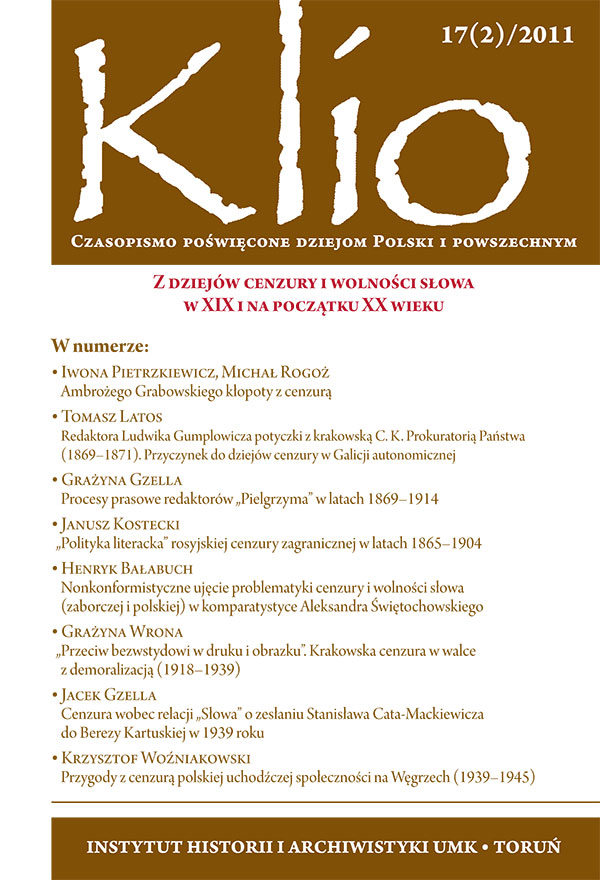 Summary/Abstract: Almost 4500 new literary publications in Polish (counting by titles) had been tried to bring in to Empire in 1865–1904. The foreign censorship banned from circulation almost 1400 of these books – in a whole or in a part. These books were treated more lenient than others – because in 1872–1904 the censors prohibited only 29,7% of them, when nonfictional publications – 40,5%. The literary works were more rarely than others banned in a whole. The censorship policy towards imported belles-lettres became slowly less repressive, in spite that it had been changing: during 70. had occurred to be moderate, using various bans conditional upon subject; late 80. and the beginning of 90. it was a period of the strongest repressions, but the second half of 90. and the beginning of XX century it was quite successful time for belle-lettre import. The censorship hit books of Polish authors in the most severe way (which consisted of ¾ of all banned imported works), particularly directed to the people or to the general public or imported for the first time since they were published and didn’t belong to any book series. The most banned author was Słowacki and next: Lenartowicz, Krasiński, Urbański, Poeche, Sienkiewicz (mainly versions adapted for children), Miłkowski (T.T. Jeż), Wilkońska, Przybyszewski, Abgarowicz, Rogosz, Zacharjasiewicz, Kasprowicz, Chociszewski, Tetmajer, Tuczyński, Mickiewicz, Asnyk, Wyspiański, W. Bełza, Przyborowski i Konopnicka.