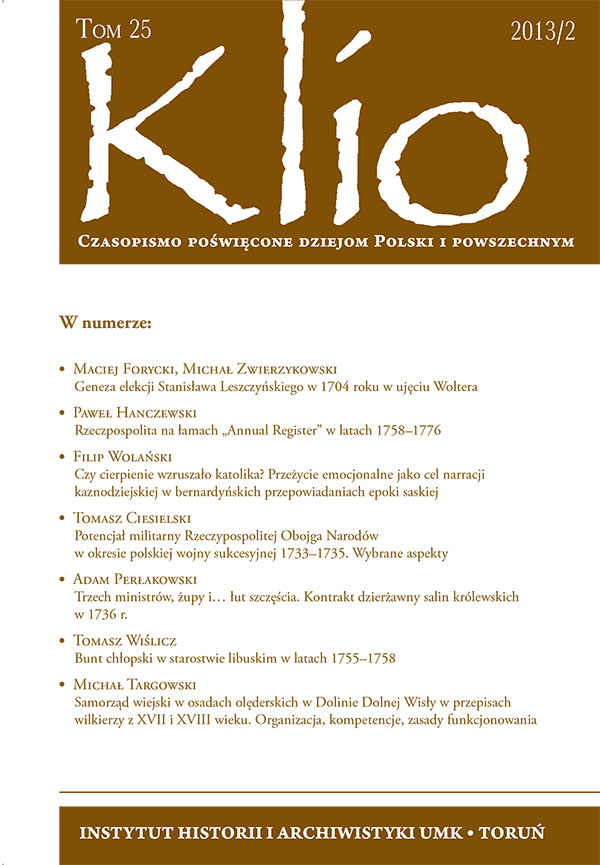 Summary/Abstract: During 1750s Sub-Carpathian region of Poland witnessed numerous peasant revolts. The centres of rebellion usually acted in isolation from one another, even from geographically neighbouring areas of protest. Disorders were not too intense, the use of violence occurred only rarely and rebels generally tried to give the traits of legality to their actions. One of the rebellions took place in the royal demesne of Libusza (near the city of Biecz). Local peasants came into conflict with the tenant of the demesne, Józef Gordon. The subject of the dispute was primarily an overstatement of the duties required from peasants by the tenant. In the response, rural communes sued him before the royal court and got some expressions of support from the king’s officers. The discrepancies in the interpretation of the law and royal decrees led to the outbreak of violence and the tenant had to flee from his manor house in Libusza. Next, the peasants bloodlessly resisted the intervention of regular troops and the demesne got under the sole possession of the peasants for a few months. However, the movement began to weaken and eventually the peasant communes of the demesne complied with the judgment cited by the commission appointed by the king. The verdict clearly favoured the tenant and several leaders of the rebellion were sentenced to death. In fact the revolt was not directed against the social system of the Noble Republic, on the contrary – the peasants expected help from the king, as the only trusted institution of the state. When he refused to support them, they had to consider themselves as defeated.