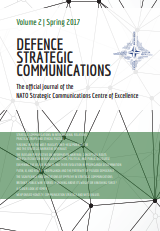 Summary/Abstract: Communications practitioners continue to see strategic narrative as vital to securing domestic support or opposition to war. Yet despite an extensive literature on the narratives states construct, the stories domestic citizens tell about war are rarely examined. Consequently, the formation of strategic narratives is only informed by the stories governments think citizens tell, rather than those they actually tell. This paper presents a qualitative analysis of the stories the British public tell about their country’s role in war. Focusing on genre—the general pattern of a given story—¬ it reveals five narratives citizens use to interpret Britain’s military role. These portray Britain as Punching Above its Weight; a Vanishing Force; Learning from its Mistakes; being Led Astray, or a Selfish Imperialist. At a time of uncertainty about Britain’s international role following the ‘Brexit’ vote, it provides an in-depth perspective on a state where military intervention is commonplace but understanding of public interpretations of war remains limited.