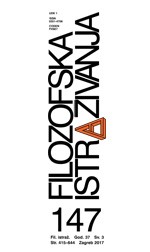 Summary/Abstract: The goal of this paper is to present aspects of the problem of theoretical and practical in the philosophy of Hegel and Kangrga. The presentation is focused primarily on Hegel, but also on practical action of individual (individuality and subjectivity) from the standpoint of universality, which is fundamental for Hegel’s thought. For Hegel, reality is logic. Path to Hegel is thus shorter via Spinoza, than any other philosopher. However, Spinoza’s pantheism remains in the field of theoretical, that is, it has no subjectivity. The level of mind is reached via self-consciousness. This cancels otherness. In his work, Hegel primarily relied on ethical-practical thought in Kant and Fichte. Kangrga’s partical critique of Hegel, because of the identification of speculation with dialectics, mostly refers to Ficthe’s disposition regarding the spontaneous identity of subject and object. Thus, according to Kangrga, after Fichte, mind is by its essence practical.