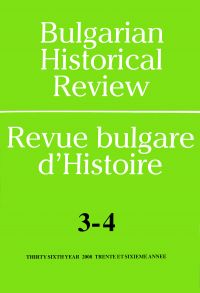 Summary/Abstract: The study presents the policy of France in the Balkans in the context of its long-term strategic objectives and how it was perceived in Sofia. The role of Paris of a conciliator of countries with strained relations is revealed. On the other hand, countries at loggerheads noticed the increased French interest in the region and tried to direct it in their support on controversial issues. The behavior of France in relation to the contradictions between Turkey and Greece and between Bulgaria and Yugoslavia is also described.