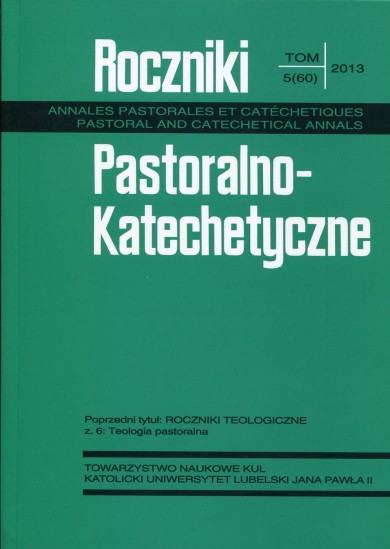 Summary/Abstract: Catechetic documents emphasize that adjusting the catechesis to its addressee should be understood as an exceptionally maternal activity on the part of the Church that recognizes each person, also an intellectually disabled one, as a Divine role and a Divine structure (cf. I Cor 3, 9), who should not be ignored, but has to be cultivated and built with hope. The deciding criterion is the Church’s care of each man, care of transmitting the only Word that redeems. This criterion inspires each form of catechesis, and especially the catechesis of people intellectually disabled, requiring religion teachers to show proper competence and creativity (cf. General Directory of Catechesis 169, 189; CT 31; CCC 24-25). Catechetic documents also suggest that the psychopedagogical characteristics of intellectually disabled people should be considered in such a way, which could allow preparing a special catechesis for them. In Poland special catechesis tries to achieve this aim, taking into consideration the terminology respecting both the standards of special pedagogy and the directives of the Catholic Church concerning catechesis, as well as the Polish catechetic tradition.