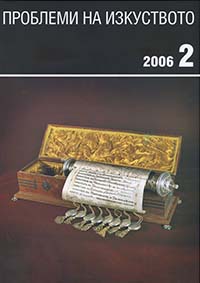 Summary/Abstract: The article focuses our attention on the artistdecorator Stefan Badzhov, whose work, social and professional activities are important for shaping the visual environment of modern Bulgaria. Three areas of his career are given greater consideration and discussed in detail — his work as an artist-decorator, his teaching career in the Academy of Arts, and his social activities. Educated in the famous Art-industrial School of Prague, he soon becomes an incarnation of the artist-decorator in Bulgaria, and manages to express himself in various genres of the applied arts; his work includes gifts for the royal family (a photo album, fruit bowl, and a jewel), decoration of buildings, fairs, ceremonies, and his job as a painter and editor of magazines and newspapers. Important part of his activity was the time he was taught at the Academy of Arts. He was appointed in year 1908 as teacher of stylization and general decoration. He is also being recognized for disseminating the secessionist aesthetics and imposing its national-romantic tendency known as "Bulgarian style". Part of Stefan Badzhov's public activity includes membership in the associations "Contemporary art", "Bulgarian-Czech partnership", "Slav talks", and the unions "Lada" and "Unak". His participation in "Contemporary Art" plays a big role in the modernization of Bulgarian art and the development of the applied arts in particular. The article talks about Badjov's work as a critic and proponent arts, folklore and crafts. As a conclusion, it stresses his importance for the modernization of Bulgarian art and aesthetic environment.