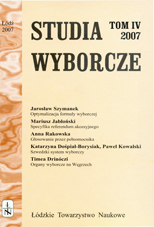 Summary/Abstract: Swedish state-hood is being formed since the beginning of XI century. Starting from the germ of constitutional act from 1319, through establishing first National Gathering (1435) up to the first Instrument of Government from the early days of XIX century, foundations of the unique Swedish construction of political system had been curved. Since the second half of the XIX century, permanent democratization process went on and was crowned by establishing a new unicameral parliament and passing new Instrument of Government (1974) which is in force until now. The Instrument of Government together with Act of Royal Succession, the Freedom of Press Act and the Fundamental Law on Freedom of Expression are recognized as Constitution of Sweden. In the same time so called “Swedish model” was fully formed. This model is based on protective role of state, neutral attitude in foreign policy and strong, emancipated individual. Since the 1930’s Swedish political scene is dominated by the Socialdemocratic Party, which maintains domination, yet with only few short intervals. The Party is the most important factor responsible for contemporary shape of Swedish sociopolitical system. The Swedish voting system superbly fits the whole construction of political system. Similarly to the political system, it has evolved form based on a set of qualifications up to the fully democratic, present shape. First step on this path was Lindman’s proposal (accepted in 1909) founding the whole voting system on the proportional rule. In next years respective restrictions in the access to voting rights for citizens, have been abolished. Contemporary Swedish voting system is one of the most proportional in the world. The Parliament contains of 349 members being elected for 4 years in 29 constituencies. Modified Sainte-Leguë method acts only slightly in favor of medium and big parties. Voters have at their disposal a few options of casting votes (starting from voting personally up to per procura procedure) and several ways to express their support (from voting on a party list up to voting on a specific candidate). Organizing, controlling and announcing of elections results lies in hands of The Swedish Election Authority, The County Administrative Boards, The Elections Committees and The Election Review Board. The Swedish voting system is dexterously operating mechanism fulfilling all democratic requirements and standards and is perfectly harmonized with the state model.