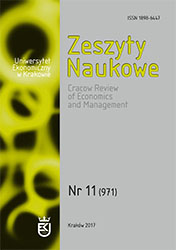 Summary/Abstract: Bankruptcy is a characteristic of every developed market economy. Numerous attempts have been made to predict it. One way this has been done in research is by building models which are based on the characteristics of the industry companies operate in. Due to the difficulty of gathering a large enough research sample, Polish researchers rarely try to build models for certain industries. This article reviews the empirical research related to this issue. The first aim of empirical research is to compare prediction errors of both industry and general models. The second was to define the determinants of joint-stock company bankruptcy in particular industries. Empirical studies were conducted on 180 joint-stock companies in the Polish capital market. Calculations were performed using the bootstrapping method and multivariate discriminant analysis.