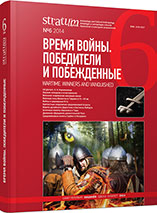 Summary/Abstract: Swedish fortress of Landskrona, founded by the Swedes in the Novgorod area on the coast of the Neva River at the confluence of the river Okhta in 1300, had lasted only one year. In the following 1301 it was taken and destroyed by the Russian troops.Excavations of 2006—2010 investigated a significant part of the fortress of Landskrona (about 70 %), including the central site and defensive moats at the eastern and to a large extent at the southern and northern sides of the fortress. The excavations showed that the fortress was a regular one and protected by two lines of moats. Numerous items of arms - spearheads, arrows and crossbow bolts were found in wooden structures and the filling of moats. Piles of burnt wooden structures (presumably, debris of walls), were uncovered and studied on the inner slope of the first defensive moat. Concentrated finds of arms were documented in two spots of the inner moat of Landskrona: in the south-east and in the center of the eastern part. Finds were discovered along the same lines in the outer moat. Location of the found arms suggest that Landskrona was assaulted from the south-east. The Russian troops attacked from the least protected field-side part and from the territory between the Okhta River and the eastern moats.